Here we have a late model Dallas-B. Slightly different from the pre-war models, i believe they were made by George Houghton & sons after the war.

The resonator attaches with 4 small screws into the flange on the post war model, and there is no perch pole inside the pot. The finish on the later models was a thick bright red finish too.

When this uke arrived at the restoration barn it was in a very poor state with a battered fretboard and very worn finish.

I removed the remains of the original finish and polished the hardware. New tuners were fitted and the resonator was repaired. A slight red stain was added before finishing the uke with Tru-oil.
A very pleasing restoration to one of my favourite ukes. 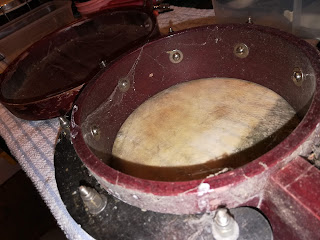 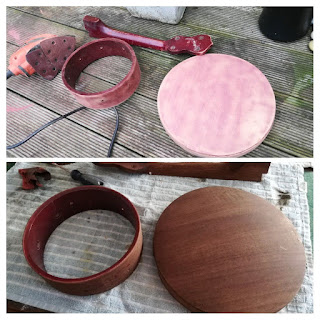 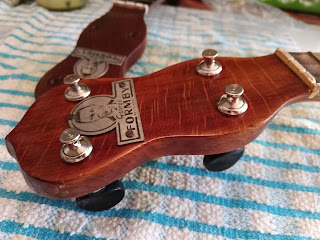 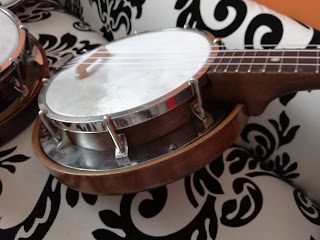 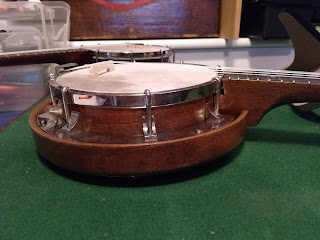 Posted by strumminsimon at 03:43 No comments:

This uke is made by English maker John Grey, branded with Roy Smeck De-luxe badge.
There are 3 or 4 ukes in this endorsed range. This, the deluxe maybe the top of the range model.
Fairly basic uke with standard John Grey hardware fitted.
The pot & resonator have a nice veneer, adding a bit extra above the standard models.
Interesting flange design, razor sharp as usual too! the fretboard is inlaid with markers, and finished with a cream binding which matches the finish on the resonator.
The uke is similar in size and weight to a Dallas-C. Plays well with the usual British uke Woolly tone.
Fairly rare, i haven't seen too many of these around. 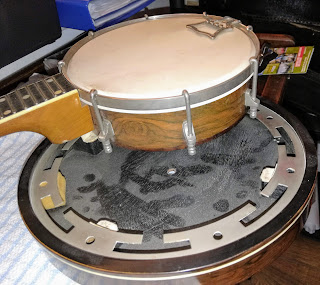 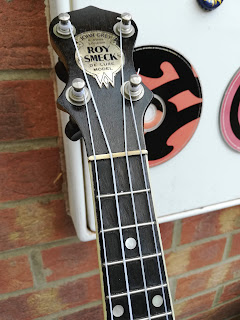 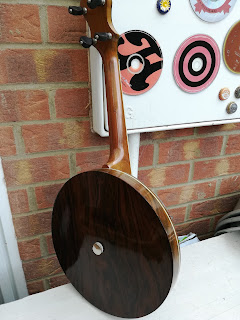 Posted by strumminsimon at 03:31 No comments:

Have a look on Ebay and chances are you might find a rare Banjo uke. Even one signed by George himself maybe?
OK, so they are not that rare, but they are highly collectable, and great looking.
Mostly made before the war they are of varied quality, some badly built with high actions and wonky necks.

I have restored a few more Dallas models recently and notice how the manufacture changed at some point during the run. An early model D/1070 i restored,  has the neck with attached support pole. Usually on the Dallas instruments inside the pot is a piece of wood slotted in to appear to be attached to the neck, which is simply screwed onto the pot.

Not usually available for sale but i have decided to list a few to sell. I tend to list with Andy Eastwood's Ukulele Market, but i have a few in the collection and i need to make a bit of space.

Drop me a line if there is anything of interest, and feel free to share too. 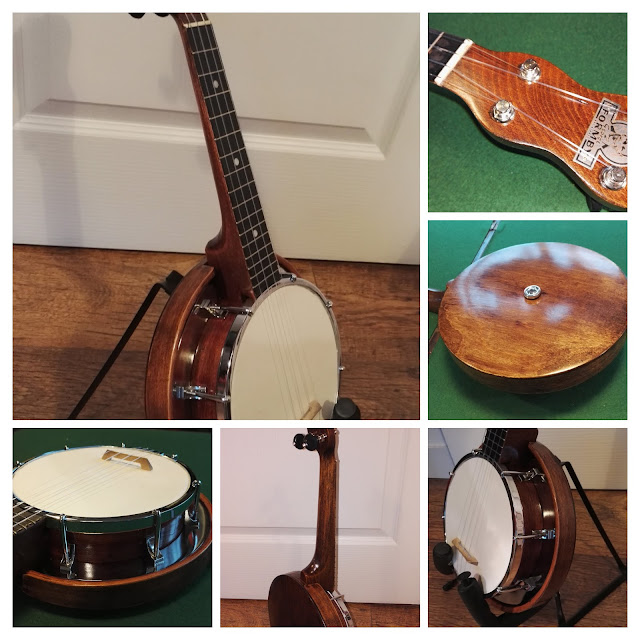 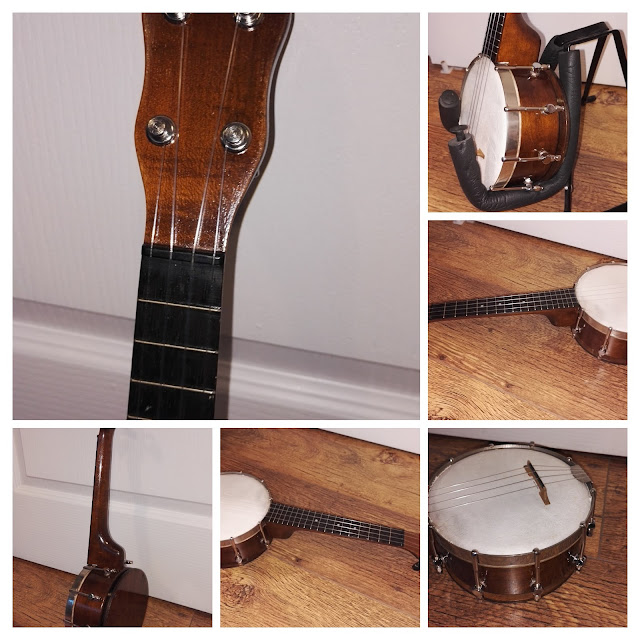 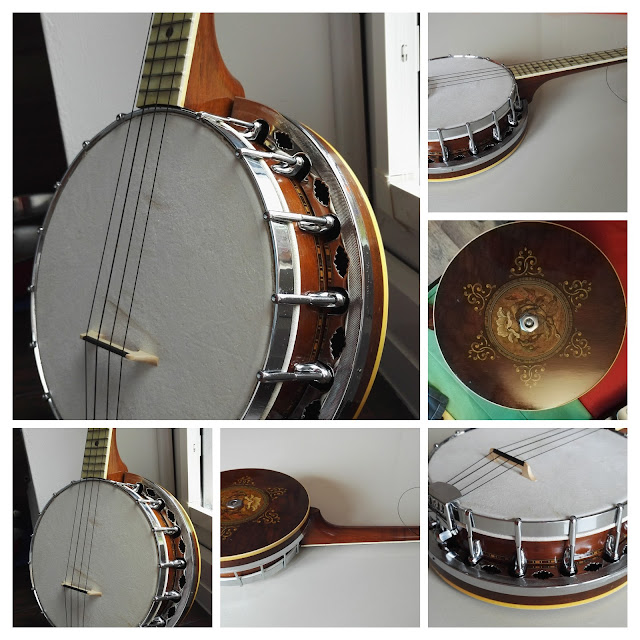 Replated metalwork, and restored to high sheen finish.
Original weathered finish shows on headstock as it has clouded over. Decal is complete and original.
Fitted with new Calfskin. 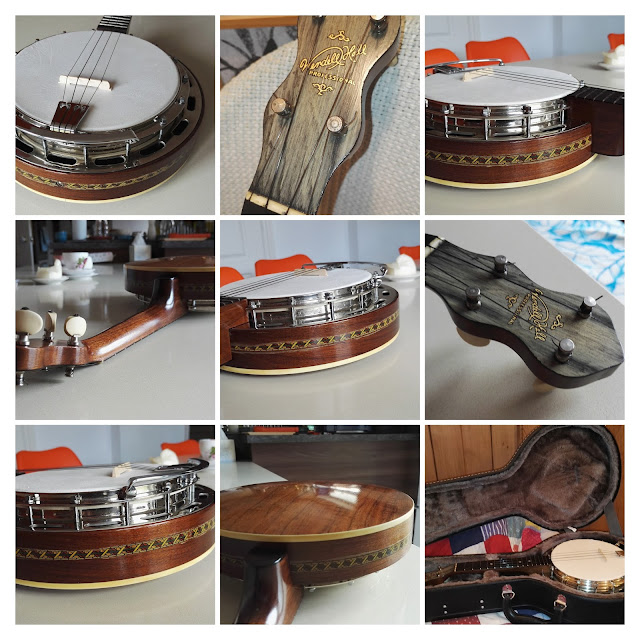 All posted worldwide.
Sold set up to play as seen in  photos.
Collection Welcome.

Posted by strumminsimon at 10:39 No comments:

These Gibson ukes are right up there with the best vintage instruments. Made in the 1920's not too many of these come around often.
This uke has travelled around the world I've found, tracing back its ownership over the past 20 years! 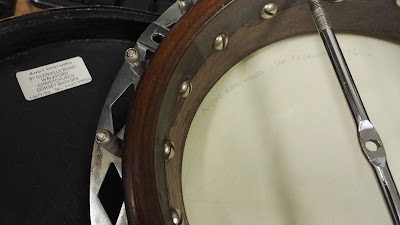 This uke arrived with a homemade looking resonator, once removed i immediately noticed the sticker from Andy Eastwood. Dated from 1992, with a vellum fitted in 1996.
A quick email from Andy confirmed this. He also told me he bought it from Sean Moyes.
Two highly regarded players as former owners, a nod to the quality of this instrument.
I bought the uke from NYC from a friend of my Banjolele buddy, John Bianchi.
Its always interesting to trace back where these old ukes have been. Who knows where it was for the other 70 years of its life? 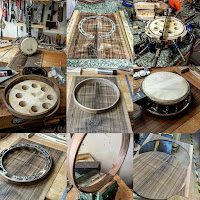 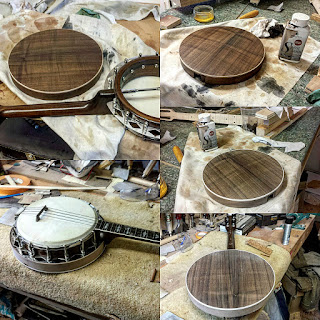 The Uke was stripped down, all the metal parts were rechromed. The neck and pot were refinished with several layers of Tru-oil.

This ukes plays with a rich clear, loud tone. Exactly what you would expect. I will leave the pictures to do the talking.
Posted by strumminsimon at 07:03 2 comments:

100000 Visits to The Ukulele Restoration Barn

At such a monumental number i thought it was time i started adding some new restoration jobs to the blog.

Ive taken some time away from ukuleles over the past year or so, but recently due to a change in my job i found myself with some time on my hands. Those old ukes gathering dust were soon stripped down in bits in my workspace.

Currently i have around 8 instruments in various stages of restoration, and i will aim to show these during the process.

I also have a couple of cracking banjoleles hanging around that i didnt get around to showing on here.


I hope to keep your interest up with lots more restoration jobs to come. If you are looking for a high end restored instrument please get in touch as i do sell my collection from time to time.
Posted by strumminsimon at 09:54 No comments:

This model is very ornate with fantastic decal pattern on the resonator. Also the pearloid covered fretboard and headstock. Great for preserving the wood on the fretboard!
The uke is complete with decal around the pot, 3 part neck with binding, a very decorative flange covering the resonator. 16 hooks provides an excellent tone to this very well made instrument.

I wont go into detail on the history of this great model. John Bianchi talks about the SV ukes on his blog here..http://theukaholic.blogspot.co.uk/2011/08/rose.html

The uke was promptly stripped down and the parts sent away for re-plating.
The wood was re-finished which brought out the colour in the old decals 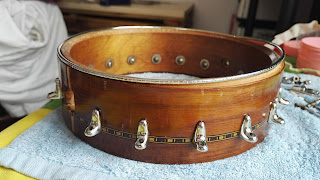 Well made instruments are always a joy to put back together and this was no exception. Set up with a calf skin vellum and Gali strings. 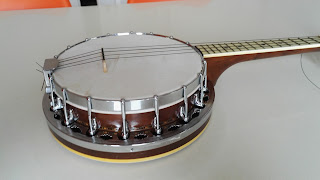 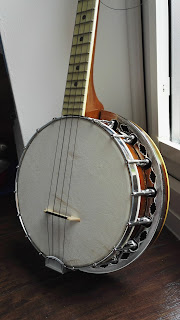 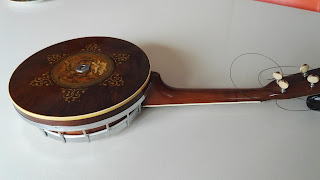 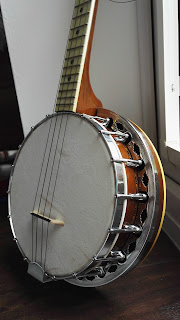 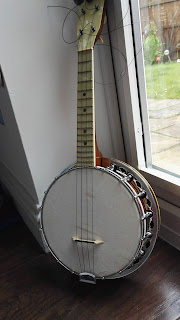 Posted by strumminsimon at 10:00 No comments:

The Stockton to Darlington Ukulele express